The Arduino Nano is very much similar to the Arduino UNO. They use the same Processor (Atmega328p) and hence they both can share the same program. One big difference between both is the size UNO is twice as big as Nano and hence occupies more space on your project. Also Nano is breadboard friendly while Uno is not. To program a Uno you need Regular USB cable where as for Nano you will need a mini USB cable. The technical difference between Uno and Nano is shown below.

There is a considerable amount of difference between the Arduino Nano and the Arduino mega as the processor used itself is different. Arduino Mega is more powerful than an Arduino Nano in terms of speed and number of I/O pins. As you might guess the size is also bigger than an Arduino UNO. Arduino Mega is normally used for projects which require a lot of I/O pins and different Communication protocols. The technical difference between Nano and Mega is shown below.

The Arduino board is designed in such a way that it is very easy for beginners to get started with microcontrollers. This board especially is breadboard friendly is very easy to handle the connections. Let’s start with powering the Board.

There are totally three ways by which you can power your Nano.

USB Jack: Connect the mini USB jack to a phone charger or computer through a cable and it will draw power required for the board to function

Vin Pin: The Vin pin can be supplied with a unregulated 6-12V to power the board. The on-board voltage regulator regulates it to +5V

+5V Pin: If you have a regulated +5V supply then you can directly provide this o the +5V pin of the Arduino.

There are totally 14 digital Pins and 8 Analog pins on your Nano board. The digital pins can be used to interface sensors by using them as input pins or drive loads by using them as output pins. A simple function like pinMode() and digitalWrite() can be used to control their operation. The operating voltage is 0V and 5V for digital pins. The analog pins can measure analog voltage from 0V to 5V using any of the 8 Analog pins using a simple function liken analogRead()

These pins apart from serving their purpose can also be used for special purposes which are discussed below:

These special functions and their respective pins are illustrated in the arduino nano pin diagram shown above.

How to use Arduino Nano

It will hardly take 5-10 minutes to upload you first program to Arduino Nano. All you need the Arduino IDE an USB cable and your Nano board itself.

The first step would be install the Arduino IDE which is available for download for free from the below link. After installing Arduino you might also want to install the drivers (link given below) for you Arduino to communicate with your Computer

Once arduino IDE is installed on the computer, connect the board with computer using USB cable. Now open the arduino IDE and choose the correct board by selecting Tools>Boards>Arduino/Nano, and choose the correct Port by selecting Tools>Port. Arduino Uno is programmed using Arduino programming language based on Wiring. To get it started with Arduino Uno board and blink the built-in LED, load the example code by selecting Files>Examples>Basics>Blink. Once the example code (also shown below) is loaded into your IDE, click on the ‘upload’ button given on the top bar. Once the upload is finished, you should see the Arduino’s built-in LED blinking. Below is the example code for blinking: 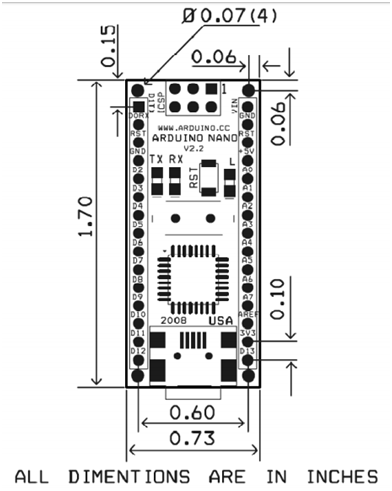 We will never spam you.

Be a part of our ever growing community.

TDK-Lambda’s wide-input buck-boost DC/DC converters have an adjustment range of up to 9.6 V to 48 V.