Transistors are one of the very important components used in electronic circuit constructions. These humble components can almost be found everywhere; from simple relay driver circuits to complex motherboard circuits, transistors prove their presence. In fact, your microcontrollers and microprocessors are nothing but a collection of a large number of transistors synthesized to perform a collective operation. Do remember that many switching devices like BJT, MOSFET, IGBT, SCR, TRIAC, DIAC, etc. can be collectively called transistors. But, the most basic (oldest) of the transistor is the BJT Transistor, hence in this article, we get into details of that, you can use the links to learn more about other power switches.

BJT is the short form of Bipolar Junction Transistor, it is a solid-state current-controlled device which can be used to electronically switch a circuit, you can think of it as your normal Fan or Light switch, but instead of you turning it on manually it can be controlled electronically. Technically speaking, BJT is a three-terminal device with an Emitter, collector, and a base pin, the current flow through the emitter and collector are controlled by the amount of current applied to the base. Again you can think of emitter and collector as the two ends of your switch and instead of pressing the switch, we have the base pin which can receive the control signal. But how exactly does it work? And how to use a transistor to build interesting circuits? That's exactly what we are going to answer in this Tutorial. 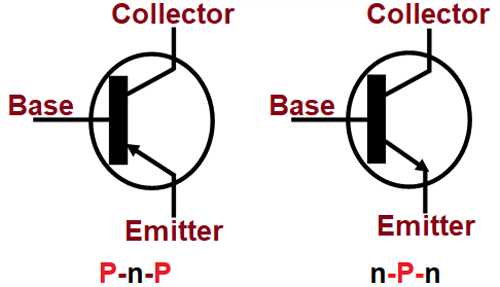 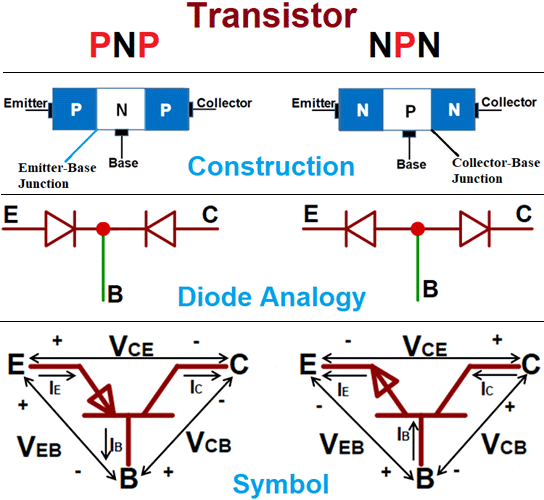 The construction can simply be explained with a two diode analogy for transistor as shown in the above image, if you want to learn more about diodes, you can consider reading his article. Consider the two diodes connected with each other using the cathode, then the meeting point can be extended to form the base terminal and the two anodes end acts as the collector and emitter of a PNP transistor. Similarly, if you connect the anode ends of the Diode then the meeting point of the anodes can be extended to for the base terminal and the two cathode ends act as the collector and emitter of the NPN transistor.

Practically the working of a transistor is very simple, it can be used as a switch or as an amplifier. But for basic understanding lets start with how transistor as a switch works in a circuit.

When a control voltage is provided to the base pin, the required base current (IB) flows into the base pin which is controlled by a base resistor. This current turns on the transistor (switch is closed) and allows the current to flow from collector to emitter. This current is called the collector current (IC) and the voltage across the collector and emitter is called VBE. As you can see in the image, we are using a low-level voltage like 5V to drive a higher voltage load of 12V using this transistor.

Now for the theory, consider an NPN transistor, the BE junction is forward biased and the CB junction is reverse biased. The width of the depletion region at the Junction CB is higher when compared with the depletion region of the Junction BE. When the BE junction is forward biased it decreases the barrier potential, hence the electrons start flowing from the emitter to the base. The base region is very thin and it is lightly doped when compared with other regions, hence it consists of a very small number of holes, the electrons that are flowing from the emitter will recombine with the holes present in the base region and start to flow out of the base region in the form of the base current. A large number of electrons that are left will move across the reverse bias collector junction in the form of the collector current.

Based on the Kirchoff’s Current Law, we can frame the current equation as

The Common Base configuration is also called as the grounded base configuration, where the base of the BJT is connected as a common between both the input and output signal. The input to the BJT is applied across the Base and Emitter Terminals and the output from the BJT is obtained across the Base and Collector terminal. The input current (IE) flowing through the emitter will be quite higher when compared with both the Base current (IB) and the Collector Current (IC) as the emitter current is the sum of both the Base current and Collector current. Since the collector current output is less than the Emitter current input the current gain of this configuration will be unity (1) or less. 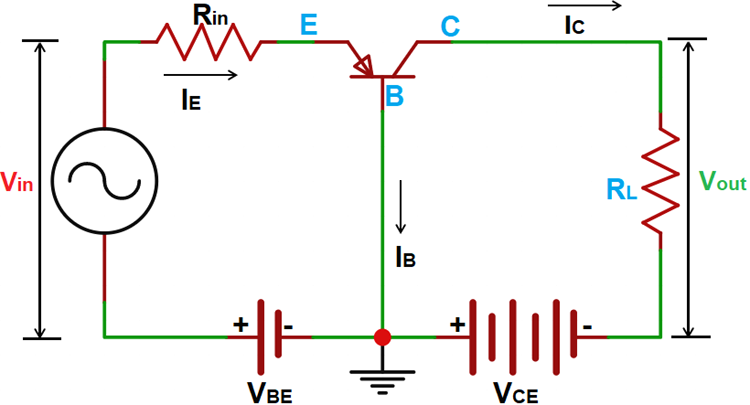 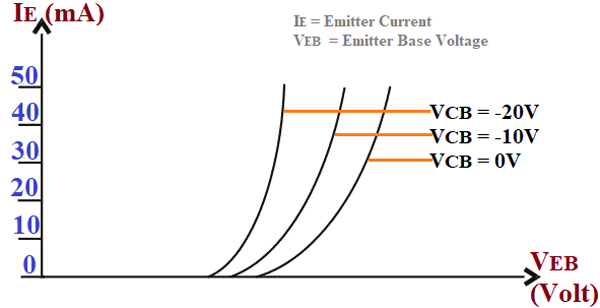 The output characteristics of the Common Base configuration are given between the collector current IC and the voltage between the collector and base VCB, here the emitter Current IE is the measuring parameter. Based on the operation, there are three different regions in the curve, at first, the active region, here the BJT will be operating normally and the emitter junction is reverse biased. Next comes the saturation region where both the emitter and collector junctions are forward biased. Finally, the cutoff region where both emitter and the collector junctions are reverse biased. 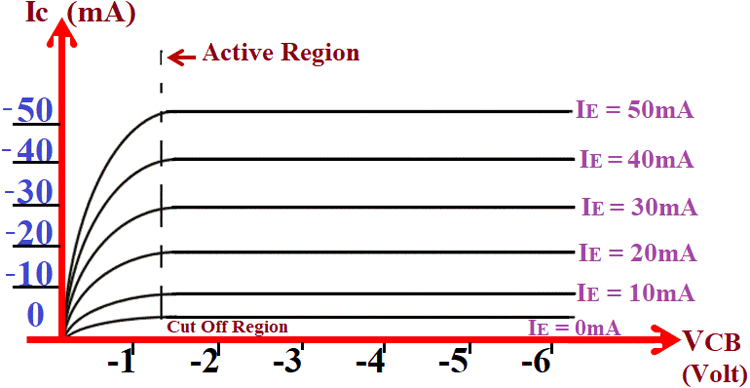 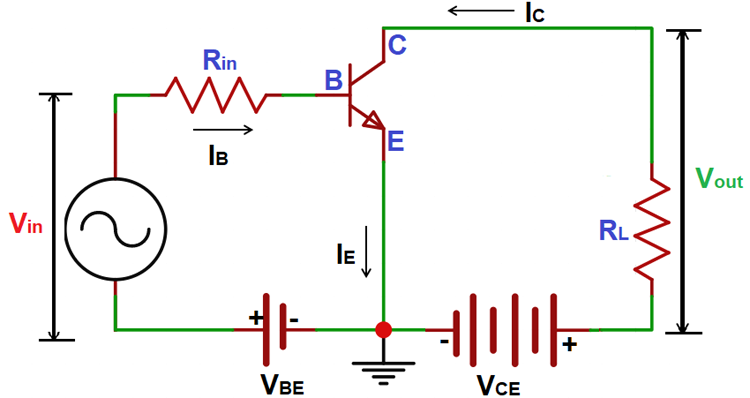 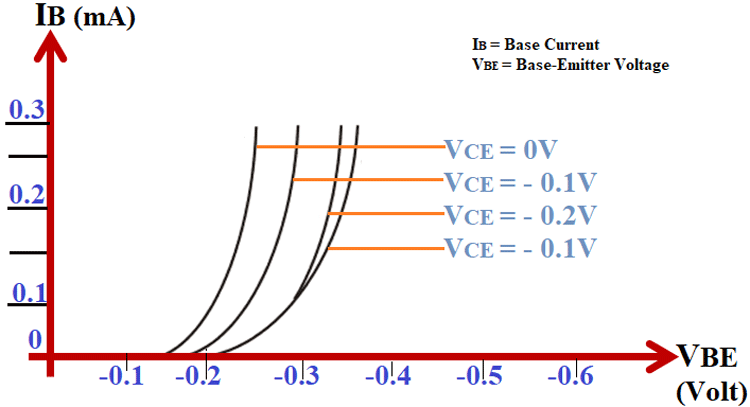 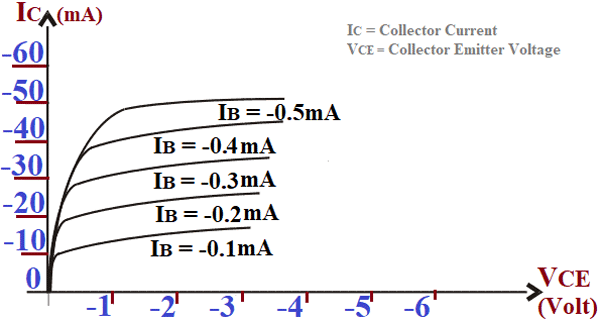 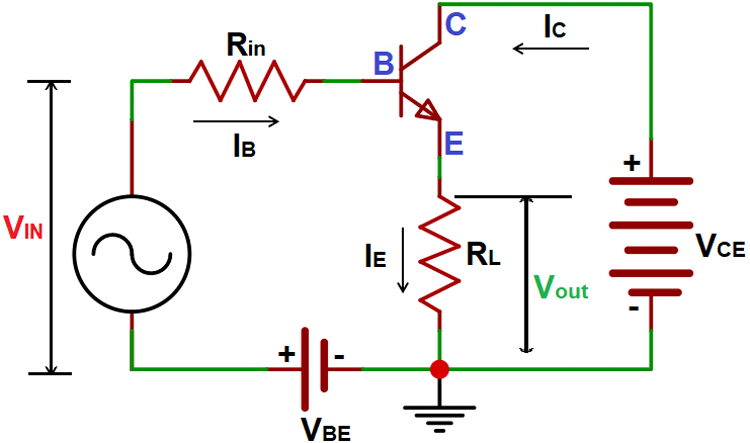