The term SCR stands for silicon controlled rectifier which is one of the most important members of the thyristor family. It is more popular than the other Thyristors like TRIAC, SCS, DIAC, etc. that some people even use the words Thyristor and SCR interchangeably. So next time when someone says just “Thyristor” in general, then they are referring to the SCR.

SCRs are constructed from silicon and are most commonly used for converting AC current to DC current (rectification), hence the name Silicon controlled rectifier. They are also used in other applications such as regulation of power, inversion, etc. The SCRs have an ability to handle high value of current and Voltage hence they are used in most of the industrial applications.

The Symbol of the SCR will be similar to that of the diode, additionally; it has a gate terminal as shown below. The SCR is a unidirectional device that allows the current to flow in one direction and opposes it in another direction. SCR has three terminals namely Anode (A), Cathode (K) and gate (G), it can be turned ON or OFF by controlling the biasing conditions or the gate input. 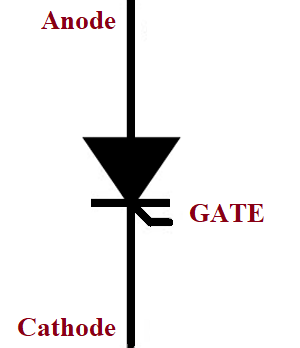 Again the Thyristor symbol and SCR symbol are the same. Now that we know how an SCR/Thyristor can be represented in a circuit diagram, let’s look into the SCR Construction and Working to understand more about it.

The SCR is a four-layered semiconductor device that forms NPNP or PNPN structure, which eventually forms three junctions J1, J2, and J3. Among the three terminals of the SCR, the Anode is a positive electrode, it will be on the P-layer and Cathode is a negative electrode, it will be on the N-layer of the SCR, the Gate acts as a control terminal of the SCR. The SCR Construction image is shown below. 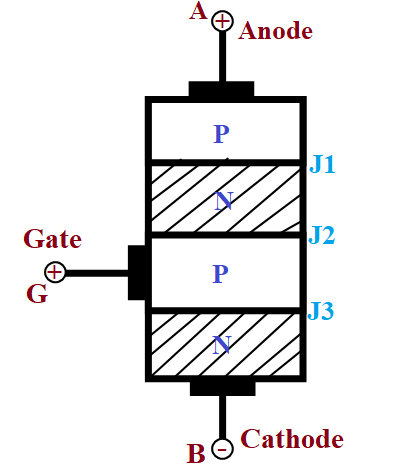 The outer P and N layers where the two electrodes are placed will be heavily doped and the middle P and N layers will be lightly doped, the gate terminal will be connected to the P-layer in the middle. The SCRs are constructed with three different types, planar type, Mesa type, and Press pack type.

To understand the SCR working principle we have to look into the different ways it can operate. Depending on the polarity of the voltage applied and the gate pulse given to the SCR, it can operate in three different modes such as

Now, let’s understand the Thyristor working by taking a look at each of the operating modes with its circuit diagram. 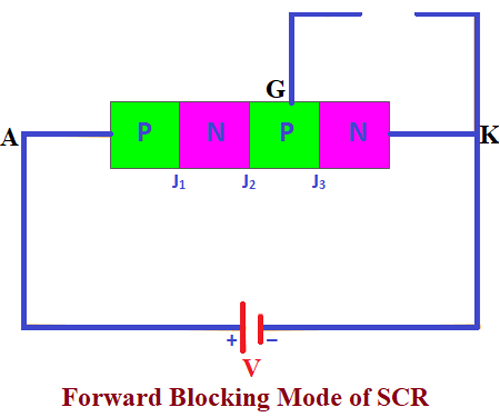 When the voltage applied to the SCR is increased and if it reaches the breakdown voltage of the SCR, the junction J2 gets depleted due to avalanche breakdown. Once the Avalanche breakdown occurs the current will start flowing through the SCR. In this mode of operation, the SCR is forward biased, but, there will not be any current flow.

The Forward Conduction Mode is the only mode at which the SCR will be in the ON state and will be conducting. We can make the SCR conduct in two different ways, one we can increase the applied forward bias voltage beyond the breakdown voltage or else we can apply a positive voltage to the gate terminal. 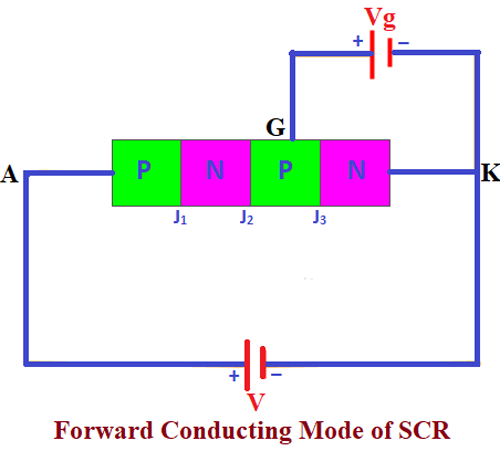 When we increase the Applied forward bias voltage between the anode and cathode the junction J2 will be depleted due to the avalanche breakdown and the SCR will start conducting. We are not able to do this for all the applications and this method of activating the SCR will eventually reduce the lifetime of the SCR.

If you want to use the SCR for low voltage applications you can apply a positive voltage to the gate of the SCR. The applied positive voltage will help the SCR to move to the conduction state. During this mode of operation, the SCR will be operating in forward bias and current will be flowing through it.

In the reverse blocking mode, the positive voltage is applied to the Cathode (-) and the Negative voltage is given to the Anode (+), There will not be any pulse given to the gate, it will be kept as an open circuit. During this mode of operation the Junctions J1 and J3 will be reverse biased and the junction J2 will be forward biased. Since the junctions J1 and J3 are reverse biased there will not be any current flowing through the SCR. Although there will be a small leakage current flowing due to the drift charge carriers in the forward-biased Junction J2, it is not enough to turn on the SCR. 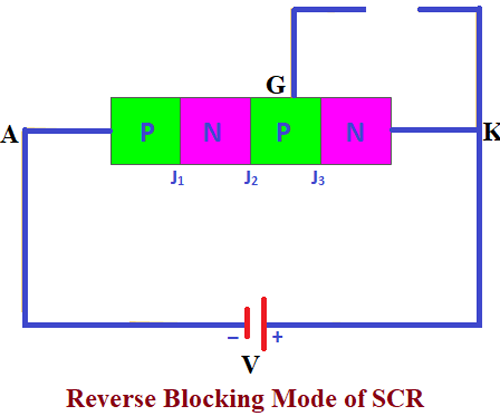 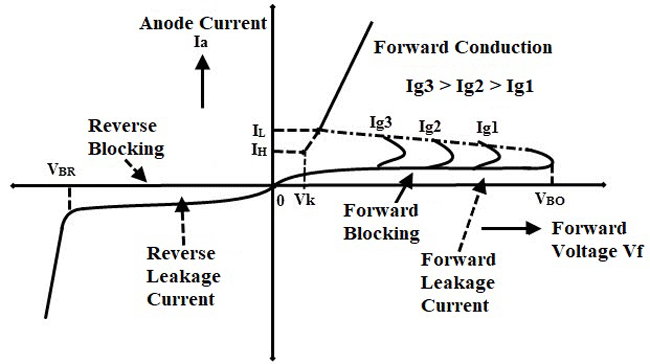 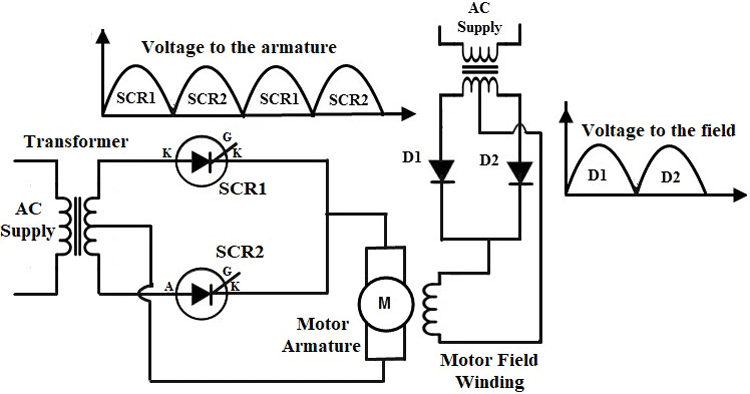 Different Types of SCRs and Packages 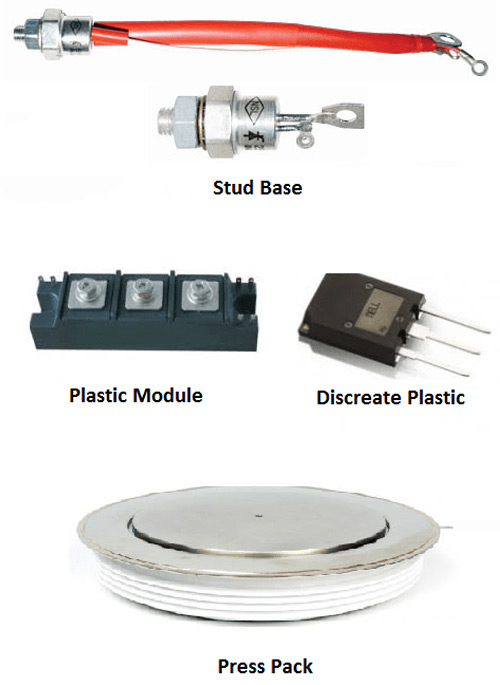 Discrete Plastic: The discrete Plastic package is a commonly known type of SCRs that has three pins attached to a plastic-covered semiconductor material. These SCRs are of planar type construction and they are the cheapest type of SCR when compared to other packages. They are available up to 25A and 1000V applications, they can be easily mounted on any type of circuit with a large number of other components.

Plastic Module: The Plastic module shares the similar features of the Discrete Plastic package, it also contains more than one device and available in the current range up to 100A. Using these modules will give a circuit a better finishing because they can be mounted to the boards with bolting the heatsink to the circuit board.

Stud Base: The stud base device will be having a screwed base, it shares the dual advantage of low thermal resistance and ease of mounting. They are available between the current range of 5 to 150 A and a full range of voltage. The only disadvantage it posses is that it cannot be easily isolated from the heat sink

Flat Base: The Flat base shares the same features of the stud base SCR, the additional advantage is that they are being isolated from the heatsink by a thin layer of insulation. They are available in the current range between 10 to 400A.

Press Pack:  The press pack SCRs are used for high current applications of 200A or above and applications with higher voltage exceeding 1200V. The SCR structure and the electrodes are packed within a ceramic envelop that provides the required isolation between the anode and cathode. Both the surface is clamped to the heat sink; hence they offer better electrical contact resistance and minimum thermal resistance.