If the power source of the circuit is reversed, for example, connecting the positive wire into the ground and the negative wire into the circuit’s Vcc. Two bad things could happen, either the circuit that we designed can get burned along with all the expensive components in it, or the power source by itself can get destroyed. Things get even more dangerous if the circuit is powered by a battery. Reversing the polarity of a battery is the worst thing that can happen in a circuit because it will not only damage the circuit but can also cause smoke and fire making it a potential threat.

Using Schottky Diode for Polarity Protection and its Disadvantages

In the below image, a Schottky diode is used in series with the power rail that will get reverse biased during reverse polarity condition and disconnect the circuit. We have also previously discussed this in the Application of Diodes section in a previous article.

The proper way to make a reverse polarity protection circuit is by using a simple PMOS MOSFET or NMOS MOSFET. It is advisable to use PMOS because PMOS cuts off the positive rails and the circuit will not get any voltage and there are fewer chances of harmful consequence if the circuit works at high DC voltages.

The field-effect transistor (FET) is a type of transistor that uses an electric field to control the flow of current through it. FETs are devices with three terminals that are source, gate, and drain. FETs control the flow of current by the application of a voltage to the gate, which in turn alters the conductivity between the drain and source. This is the basic thing that is used in P-MOSFET as a switch in reverse polarity protection.

The below figure shows the PMOS reverse polarity protection circuit.

The 100R resistor is the MOSFET gate resistor connected with the Zener diode. The Zener diode protects the gate from overvoltage. 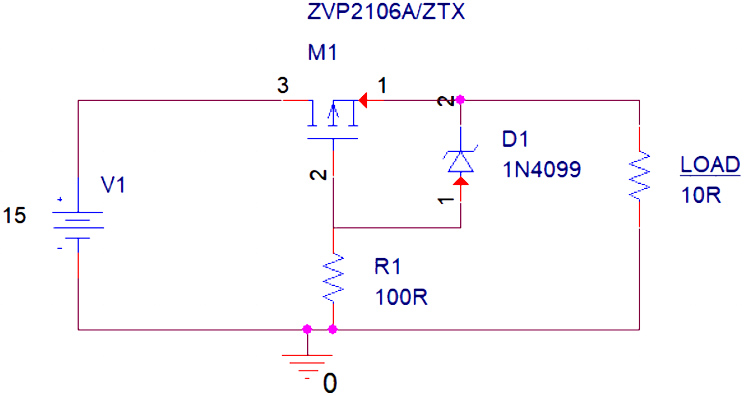 The above circuit has all the required components for reverse polarity protection. The V1 is the source that is in perfect polarity. The P-Channel MOSFET is getting biased from the Resistor 100R and the 6.8V Zener diode 1N4099. The Load is a 10R resistor.

The simulation shows the circuit is working properly in the right polarity of the power supply. The Zener diode protects the gate from the overvoltage and the load is getting 1.3A with 13.9V.

In the above image, the source is reversed. The Load is turned off completely and the circuit is acting as a reverse polarity protector. You can also check out the video below which explains the working of the circuit with simulation:

The component selection is an important part of this circuit. The main component is the P channel MOSFET.

A MOSFET has the following specs that are crucial for the circuit.

This is the maximum current that will pass through the MOSFET. Therefore, if the load circuit requires 2A of current, choose a MOSFET that will withstand this current. In such a case, Mosfet with a drain current of 3A will be a good choice. Choose this parameter larger than the actual required.

During reverse polarity, the MOSFET will be turned off due to the insufficient Vgs, and there will be no effect on the load circuit as well as the MOSFET. The above parameters are required during the normal condition and need to be carefully selected.

Selection of the Zener Diode Voltage:

100R Resistor in the Circuit:

The resistor value needs to be chosen in a way that it should not be high enough to not overheat the Zener, but low enough to provide adequate Zener bias current and to discharge the Gate rapidly if the supply voltage is suddenly reversed. Therefore, here is a tradeoff between the Gate discharge time and Zener biasing. In most cases, 100R-330R is good if there are chances for the appearance of sudden reverse voltage in the circuit. But if there are no chances of sudden reverse voltage during the continuous working of the circuit, anything from the 1k-50k resistor value can be used.

The main drawback of this circuit is the power dissipation across the MOSFET. However, that can be solved using a P channel MOSFET that has RDS on resistance in milliohms.