A potentiometer is a variable resistor that can be used in a circuit to control resistance, current, and voltage through a circuit to attain a certain output, we already know the basics of Resistor and how they work. The potentiometer is just a variable resistor, sometimes also called a rheostat, which you all could have seen in your physics laboratory, it consists of a metal coil wound on a cylindrical platform that consists of a sliding contact that is used to control the resistance of a circuit. A typical Rheostat is shown in the picture below 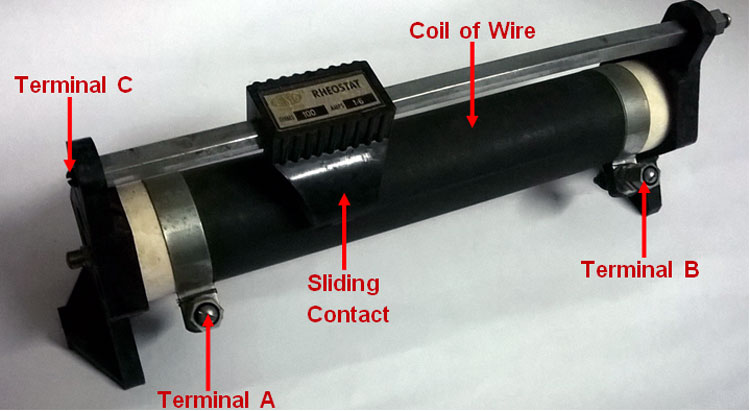 What is Digital Potentiometer?

The mechanical potentiometers are called the POT because of its pot like structure which consists of three terminals for input, output, and ground along with a controller on its top that is used to control the resistance by turning it in clockwise or anticlockwise. 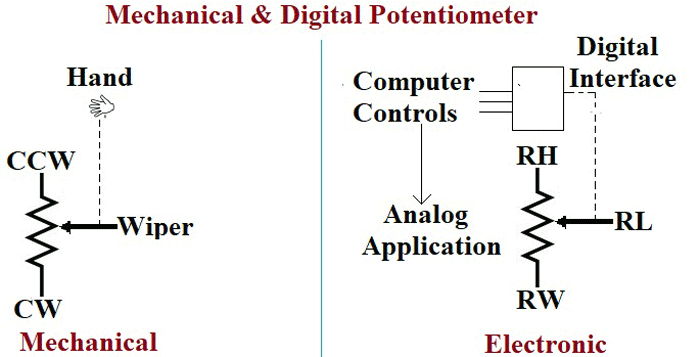 The biggest drawback of the POTs is that they are easily affected by environmental factors like dust, dirt, and moisture that could seal the wiper shaft, this made them unfit for certain kinds of applications. To overcome these drawbacks Digital Potentiometers or shortly digiPOT was introduced, the digiPOTs can work in environments with vibration and particles like dirt, dust, moisture, and grease without changing its nature of the operation.

Why digiPOTs are preferred over the POTs?

DigiPOTs are better protected in various environmental conditions as they are encapsulated in the form of an IC. They are less vulnerable to vibrations and they can’t tamper physically, this makes them more reliable to use. The digiPOT can fit in a tiny IC package of 2.9mm x2.8mm or even smaller space which can be easily mounted on a PCB board. The most popularly used MCP41010 Digital Potentiometer IC is sown below 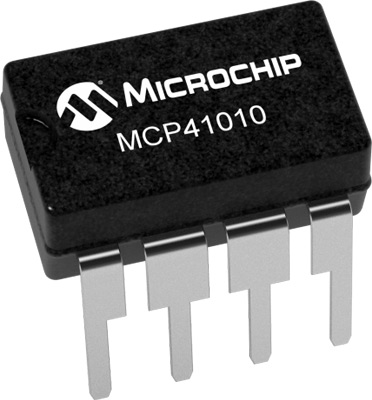 The MCP41010 includes a quad pack of digiPOT in a single package along with shutdown mode and programmable pre-set positions upon power on the wiper position. They offer higher resolution, greater stability and solid-state reliability for all kinds of applications. 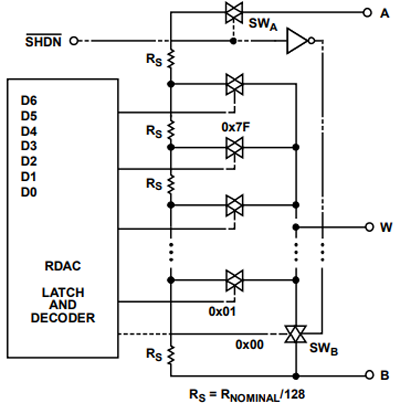 All the digital devices have some sort of memory for their operations, as the digital potentiometer is also a form of digital device they also have a memory unit. They mostly have a volatile memory unit, the volatile memory units are used only during the operation and they will not store any prior information once they are shut down. Hence, most of the digipots start from the first step while they are restarting, in some cases these devices are interfaced with FPGA or the micro-controller to store the last position. 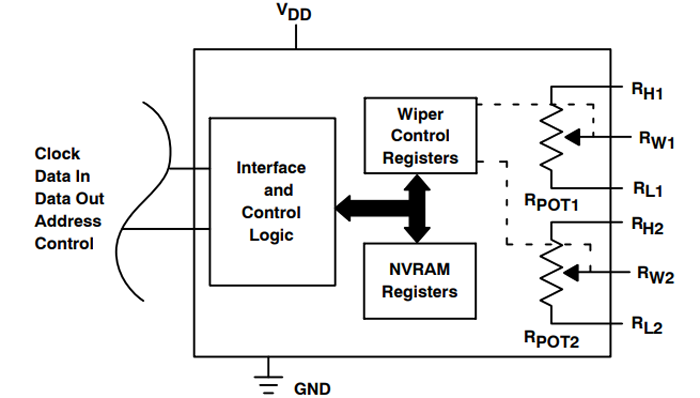 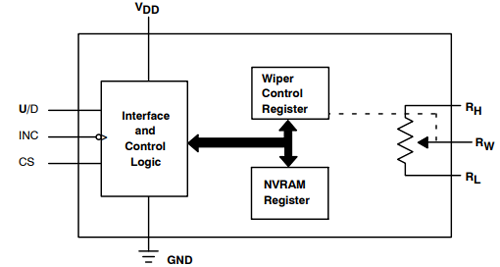 The increment /decrement interface uses three signals as you can see from the image above, the signals are

CS: CS is the Chip Select (CS) signal, it is used as an address input for multiple digital pot applications when it is enabled.

U/D:  The wiper of the pot should be moved up or down to increase or decrease the resistance of the potentiometer. This process is enabled by the Up/down (U/D) signal.

INC: The increment (INC) signal also used to move the wiper, the wiper moves at every falling edge of the increment signal.

As I said the Increment/Decrement interface is the most commonly used asynchronous bus, similarly the most used synchronous buses are SPI, I2C, two-wire, and microwire-like buses. Out of these buses, I2C & SPI are the most preferred type of interfaces. The below blog diagram shows a digital potentiometer with an I2C Control interface. 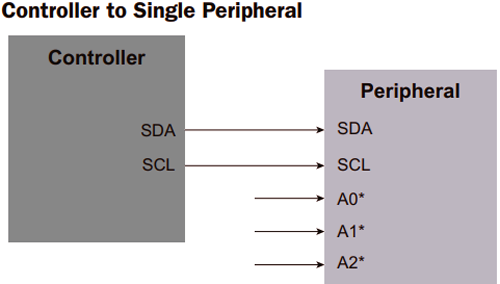 SCL/SCK:  It is the serial clock of the interface that synchronizes the control section.

SDA: SDA can be expanded as serial data, the serial data lines are used to transfer the data from the interface to the control. The SDAs are bidirectional in nature, hence they can communicate in both the directions.

Similarly the SPI Control interface Digital Potentiometers have four main signals as shown below. Again the Controller can be any microcontroller like Arduino, PIC, AVR or Raspberry PI and the Peripheral can be any digital potentiometer

SCK: SCK is the serial clock of the interface.

SDO: SDO stands for Slave Digital Output, Similar to Slave Input the SO is the output signal to the control system from the interface.

How to choose a digital potentiometer for an application?

In Potentiometer mode, the configuration consists of three terminals A, B and W, here the digital potentiometer operates as voltage driver. The wiper’s terminal voltage is directly proportional to the voltage applied between the terminals A & B and the resistance at RAW & RWB. The potentiometer configuration is mostly preferred for applications such as DAC, LCD VCOM Adjustment and analog signal attenuation.

In Rheostat Mode, the digital potentiometer will operate as a digitally controlled rheostat in which only two terminals are considered, the unused terminal can be left unused or can be tied to the W terminal. The end to end resistance of the device has 2N contact points accessible by the wiper terminals. The resulting resistance can be either measure between A terminal and wiper (RAW) Or between Wiper and terminal B (RWB). The rheostat mode is mostly used in applications such as Wheatstone bridge calibration, Op-AMP gain control, and Analog filtering tuning.

There are different types of internal memories used in the potentiometer in order to decide the starting position of the wiper, depending on the type of memory you can choose the initial position of the wiper to get varied. The four types of internal memory used in a digital potentiometer are Volatile memory only, One-time programmable memory (OTP), Multi-time programmable (MTP) and EEPROM

You must know about the maximum signal voltage that could be applied to the terminals A, B and W, where the positive VDD and the negative VSS define the Voltage boundaries. If the applied voltage exceeds the limited value, VDD or VSS will be clamped by the internal forward-biased diode.

The resolution is the bit-value of the potentiometer that is used to determine the steps of the wiper. You must choose the resolution that is enough to suit your application. The most commonly used resolutions are 8, 5 and 10 bits.

The digital potentiometer is available in various types of packages such as MSOP, SC70, TSSOP, SOIC, etc. Analyze your application and choose the most suitable package for better and cost-effective delivery of operation. 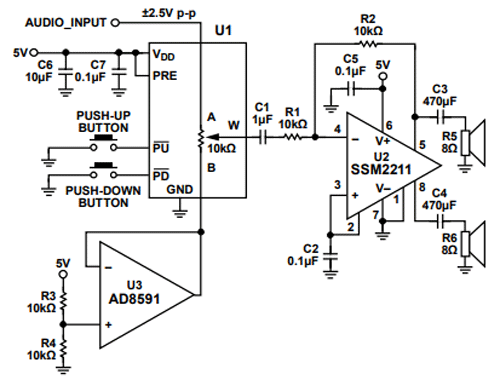