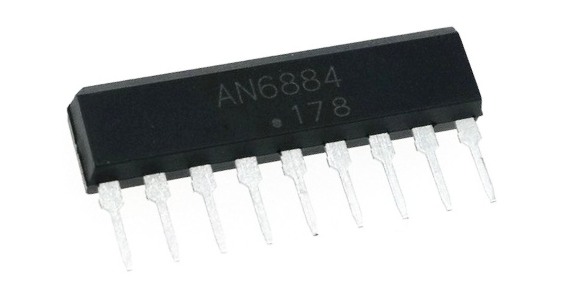 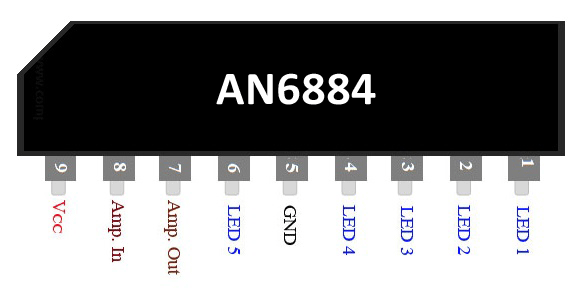 The AN6884 is a monolithic integrated circuit driving 5-LED and is capable of logarithmic (dB) bar graph display for input signal. Operating voltage range for AN6884 is 3.5 V to 16 V and current output is 15 mA.

Note: Complete Technical Details can be found at the AN6884 datasheet given at the end of this page.

Since the LEDs can be controlled without any flickering and flawlessly with equal brightness this ICs is commonly used in visual alarms and other metering/monitoring applications.

AN6884 IC doesn’t need a microcontroller and programming to control the LEDs, thus it can be easily operated with very little additional components. A sample application circuit for controlling 5 LEDs using AN6884 is given below.

As you can see we only require 5 LEDs and three resistors as additional component to use this IC. The IC can operate between 3.5 V to 16V. Based on the audio signal voltage, the reference voltage has to be set in the circuit using the 10k variable resistor. The IC also allows the designer to set the required current that should flow through LED. Both the LED current and the reference voltage can be set with the resistor R and variable resistor VR. 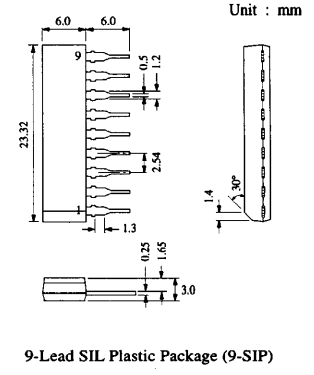