Soldering iron is probably the most ubiquitous tool used by people who practice electronics on almost every level, from beginners to pros.

Soldering irons are simple devices, with the primary function being to heat solder enough to melt it and move it to the needed place using the sharp tip. Most soldering irons consist of an electrically (and in some cases, direct heat from a flame) driven heating element which supplies continuous heat to a sharp tip, where solder is melted.

The type of soldering iron one owns is a natural progression from simple to more fully-featured and equipped, a beginner might choose a cheap iron to fulfill the task of melting solder and forming joints, while a professional might need something with interchangeable tips and variable temperature to handle different tasks. You can also check out the different types of soldering iron bits that can be used along with a soldering iron. 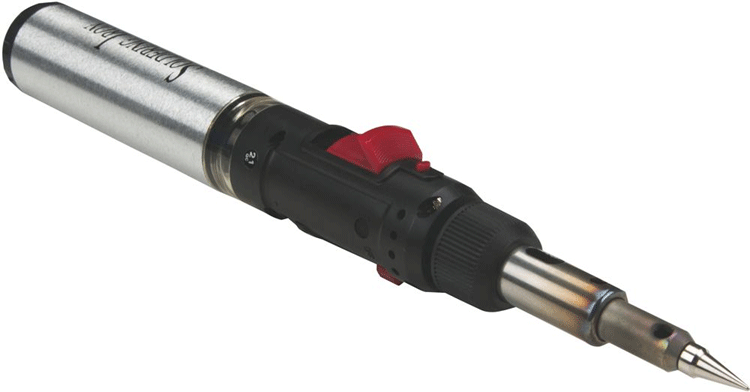 These soldering irons are different from the rest as they don’t need an electrical power source, instead, they rely on chemical energy generated through the combustion of a flammable liquid or gas. In most cases, an open flame is directly used to heat a tip to temperature.

Sometimes, the solder is heated directly by a flame (such as in plumbing applications). This method is used for large and insensitive objects. If you’ve ever tried soldering using rosin-cored solder and an open flame, you know that bits of molten flux tend to fly off and land on your fingers. It is a very painful process. This also happens sometimes with regular irons when you place too much solder on the tip.

The power output of a gas-powered iron is unrivaled, at the same time they achieve much higher power density, even a small flame generates a lot of heat energy than a filament of comparable size. The output power ranges from 25W to 125W depending on the size.

The major disadvantage of this iron is that it is not as safe as an electrically powered soldering iron, there is a pressurized container of flammable gas right next to a hot flame and hot object, much like a lighter and in most places, the right kind of fuel is less easily available than electricity. 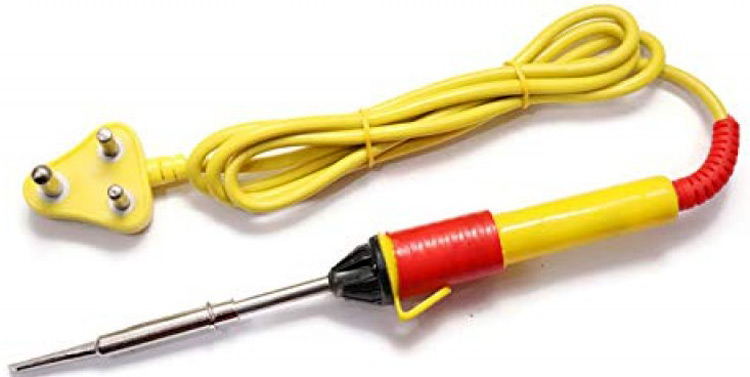 These are the types that are most preferred by beginners since they have mains powered heating element inside a cheap plastic case, managing power outputs of 5W to 30W. Sometimes, they have a little neon bulb inside them to indicate power and a changeable tip, held in place by a small metal band. Sometimes they have only two pins in the power plug, which can be a safety hazard since the tip might be exposed to mains voltages. There isn’t much of an incentive to touch a hot tip, however.

The only big advantage these irons have is that it is very cheap and effective. Despite breaking often, they can be replaced for cheap, you could go on like this for years before you’ve spent enough to reach even a fraction of the cost of certain proper soldering stations. 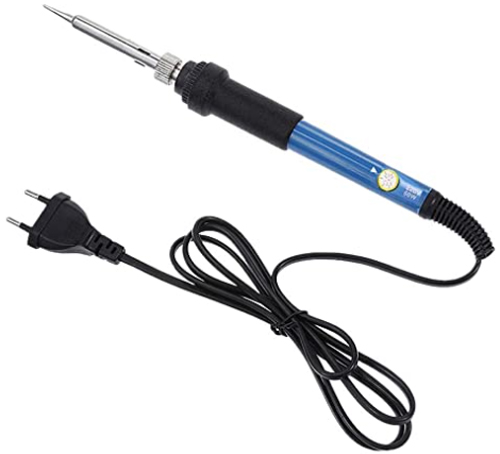 These are the most common type of soldering irons used by most advanced hobbyists and beginners. They consist of an iron and a controller which is housed in a separate enclosure along with the power supply transformer. A long cable connects the handle and the controller. In most cases, the cable is detachable at the controller end and compatible with other irons from the same manufacturer. The tips are often interchangeable too, with a variety of tip sizes available. The power can range from anywhere between 10W and 300W. 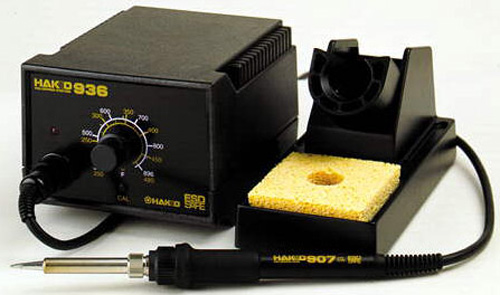 One of the more recent contenders in the hobbyist soldering iron market is the TS-100 family of USB-powered soldering irons. For what they are, they boast decent specs: 65W output power, a temperature range of 100C to 450C, and powered by a USB micro connector. On top of this, it sports a small 128x32 OLED screen and digital control. The cherry on top is that it’s completely open-source. It is not cheap, however, at around Rs.4,300.

There is another member of this family, that is a slightly lower power variant (30W) with the same temperature range (100C to 400C), but it comes with a USBC port and works with USBC-PD power banks.

The chart below compares the temperature range versus the output power of one common example of each of the types of soldering irons mentioned in the article. 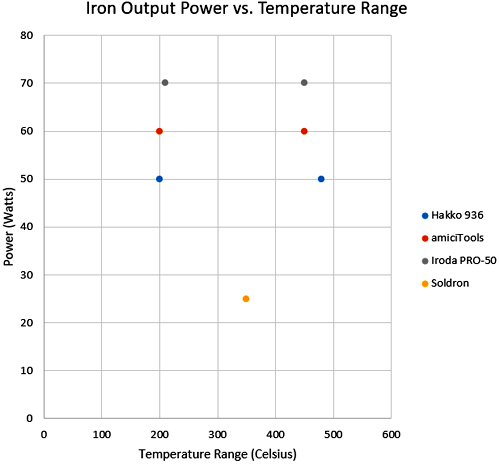 Most of the capabilities of the soldering irons seem to be well matched except for the output power.

For absolute beginners, a simple soldering iron is more than adequate, and those who want to move into electronics full time might want to consider investing in a decent soldering station. Simple adjustable irons fall into a niche, for people who want temperature control but don’t need the iron on a daily basis. Gas-powered irons are mainly used for heavy work like plumbing.