In the field of power electronics, AC Voltage Regulator is a type of power converter that is used to convert a fixed AC voltage into variable AC Voltage. A variable AC power supplies can be used in most of the day to day applications like heaters (for altering temperature settings), Fans, Dimmer Circuits, etc.

Based on the Controlling parameters, the AC power controllers can be divided into two categories:

Whereas AC Voltage Regulators fall under the phase Angle control category, which provides variable output voltage without any change in Supply Frequency.

Classification of Switching Devices based on Control Methodologies

An AC sine wave naturally reaches zero voltage for each half cycle and doesn’t require a separate commutation(turn off) circuit. Because of this advantage point, Thyristor family devices are most commonly used for low frequency, high power applications.

The table below describes some key parameters that you will come across while working with Thyristor family devices, it will help you to understand the system better.

The below figure shows the output voltage curve where the connected load is purely Resistive. The SCR naturally gets turned off when the Supply voltage reaches zero. The triggering angle, commutation angle, and conduction angle is marked below. 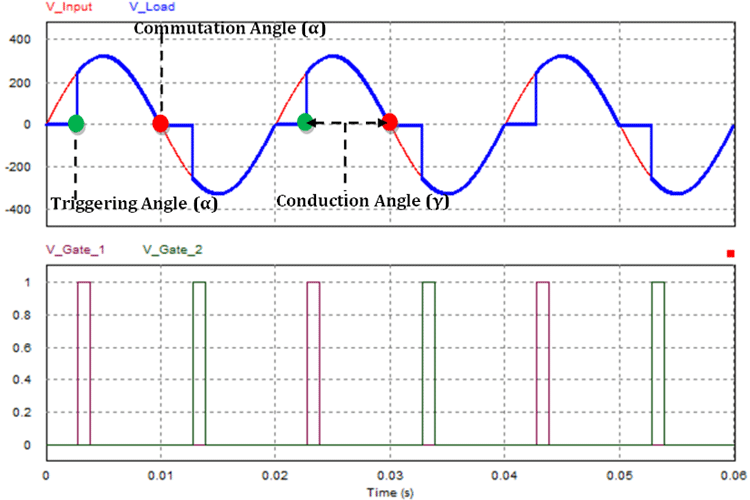 So, the angles (50˚ and 230˚) is the point in time where we have applied the gate pulse, and the Thyristor starts conducting this is known as the Triggering angle of the SCR. The angles (180˚ and 360˚) where the Thyristors stops conducting and got turned off, called the Commutation angle. The duration where the thyristors (50˚ to 180˚) and (230˚ to 360˚) is in on state (conducting state) where the output load gets powered, is known as the conduction angle. 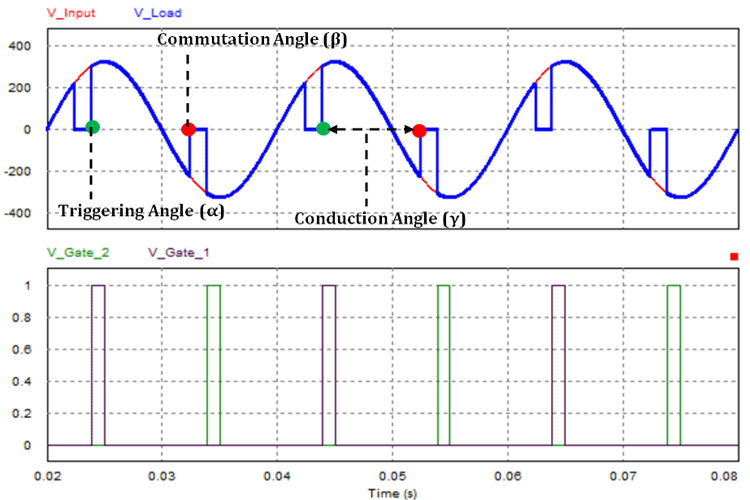 The above graph shows the output curve when a Resistive and Inductive Load (RL) is attached. With a resistive load, the Thyristors will turn off whenever the input supply voltage crosses zero. But, if we connect an inductive load parallel to the resistive load (like motors) the thyristors will not be able to turn off, even when the input gets to zero. that's due to the nature of the load inductor. So, while using inductive loads like a motor, the next pulse should be applied after the inductor gets fully discharged and the thyristor gets fully turned off.

The below images will give a basic idea about the unidirectional control method.

During the positive half cycle of input voltage of the thyristor, T1 starts conducting when the gate triggering signal V_Gate (which is shown in the graph) is applied. When the positive half cycle of input voltage reaches zero due to the natural commutation, the thyristor T1 gets turned off. During the negative half-cycle, the Diode D gets forward biased and starts conducting without any control signal and stops conducting when the negative half cycle reaches zero. With a Unidirectional control mode, one of the half-cycles can only be controlled and the next half-cycle will follow the supply voltage without any control signal. So, the overall controllability of the RMS output voltage is between 70% and 100% only. For the extended control range, we have to go with bidirectional control.

In bidirectional control, the T1 starts conducting during the positive half cycle when the V_Gate_1 pulse triggered T1, and it gets turned off when the supply voltage reaches Zero. During the negative half-cycle, T2 gets triggered by V_Gate_2 pulse and conducts during the remaining half cycle and gets turned off when the negative half cycle reached zero. Thus the bidirectional control provides full controllability during both the half cycles and output can be varied for a wider voltage range.

The bidirectional control can be enabled with different configurations based on the device type, no. of devices used, and connection configurations. The below section will give the different types of Bidirectional Control circuits and their pros and cons. 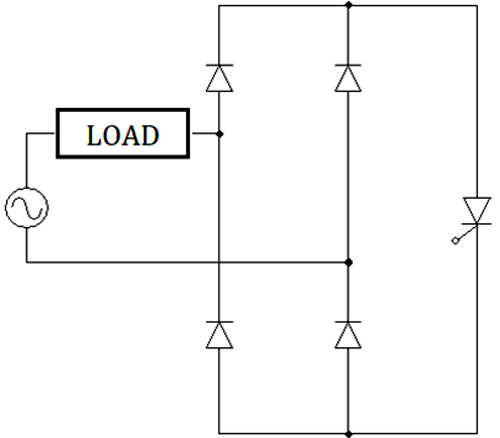 This configuration will need only a single thyristor for bidirectional control since there is a diode bridge involved. It is a simple circuit and can be designed easily as it needs only one control circuit. The downside is it needs a diode bridge which might increase the cost and size of the design.

There’s a lot of ways to archive the AC Voltage Regulation. One way is to include a diode bridge in conjunction with a Thyristor, which converts the bidirectional AC wave to a Unidirectional wave now a single thyristor can control the wave, but another easy method is to use another topology where two SCRs can be used, these two are connected in an inverse parallel configuration and now separately triggering those controls the AC sine wave. A more practical way is to use a TRIAC as this device is made to be triggered bidirectionally, therefore, making them a perfect choice for AC Regulation applications, but that is a topic for another article

I hope you enjoyed the article and learned something new, if you have any questions regarding the topic, feel free to make a comment in the comment section below.