Inductors are the most dominant element in any Power Electronics Converters, Filter networks, and Communication system where they are mostly used in Resonance networks. If you are completely new to inductors, check out the article on introduction to inductors to understand the basics. In practice, there are many types of inductors but none of them is an ideal inductor, meaning they are not pure inductors. So, while selecting an inductor for a particular application, apart from the inductance values, some other parameters like DC Resistance, AC Resistance, and Parasitic capacitance will also be associated with an inductor and it has to be considered to meet the design requirements and improve reliability.

Why is the Quality Factor of an Inductor Important?

As mentioned earlier in practice, there will be no ideal element. The inductors are made by winding the coils on different magnetic materials called cores. The inductance value of any practical inductor is obtained based on the number of turns, core material permeability, flux density, area of the core, etc. While using those inductors in practical applications, the inductance value might get changed based on applied current, signal frequency, aging factors, and operating temperature conditions, etc.

During Inductor manufacturing, the coils which are winded on magnetic core material have some internal resistance which introduces “DC resistance” along with the nominal inductance value. In the manufacturer datasheet, the designers can obtain this resistance data in the “DCR” or “RDC” column. The value of the DC resistance of an inductor depends on the wire length and size of the wire used for winding. If the required inductance value is higher, then it required more no. of turns should be winded and longer wire should be used, which leads to increased DC Resistance (Figure 1 gives the details about resistance value for different wire sizes and lengths). The inductors are manufactured based on operating current and respective coil sizes are used for the defined applications. The resistance values also depend on the size of the wire too. Using larger diameter coils produces lower DC resistance than the lower diameter coils, but frequency-dependent parameters play a major role while replacing shorter diameter coil with a larger coil diameter. 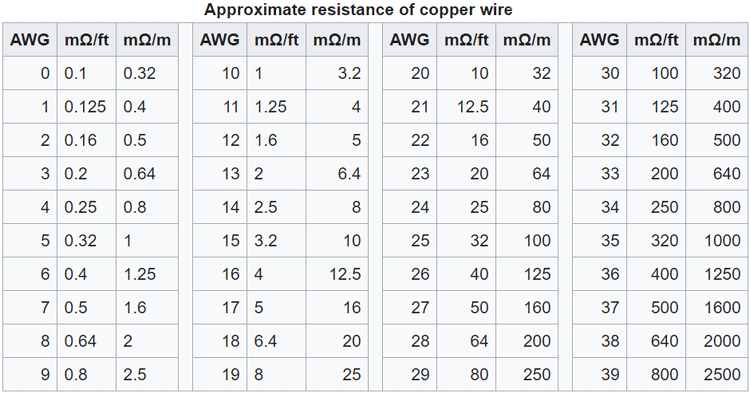 The AC resistance plays the most dominant role in increasing the wire resistance when the system is used approximately above 50 kHz frequency ranges. This effect is known as the “Skin Effect”. When higher frequency signals (over 50 kHz) are applied through the conductor wires, the current will pass through the surface of the wires instead of passing through the entire cross-section area of the conductor. Due to the non-utilization of the full coil area, the Resistance gets increased and this resistance value varies based on the increasing frequency.

In an ideal core, the variation in flux density will follow the Magnetic(H) field variation. But in practical cores, due to material property, there will be slight variations. The flux density won’t be zero for applied Zero H Field due to residual magnetism and after a certain H field, the Flux density gets saturated. The extra coercive force has to be applied in the reverse direction to bring down the residual magnetism Br to Zero. In the negative cycle also the same method has to be followed to make the system operate between the positive and negative regions of the BH Curve. The BH curve and residual magnetism also varied based on applied frequency, the Hysteresis loss increases with frequency increase. While forming the inductor, the Hysteresis loss will be added in terms of AC resistance along with the targeted inductance value. 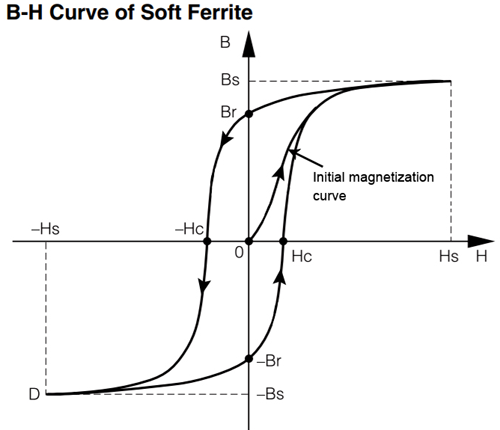 Also, the Q factor can be expressed in terms of Power Relationship. As previously mentioned the Resistance components are added with the nominal inductance due to external parameters. These resistors will add losses to the inductor which reduces the inductor efficiency.

Based on the above two relations, we can define that if the DC, AC, and Dielectric resistance values are high, the power loss also higher and the Q – Factor value gets lower. This will lead to reduced efficiency. So, the Q factor will give the details about the quality of the inductor, If the Q value is high, the user can conclude that the selected inductor has lower AC and DC resistance values, and hence have low power loss compared to lower Q – Value Inductor. Hence the Q value of the inductor should be high to get optimal performance from it.

How the Quality Factor of Inductor Impacts its Performance in a Circuit? 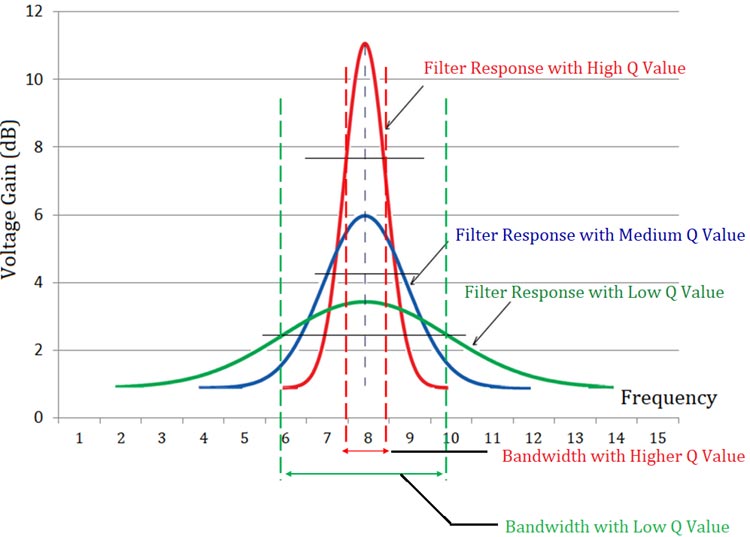 Some other applications will require wider bandwidth and the filter should pass more range of frequency signals. The below figure shows the filter response for different Q factor values. The inductor with a higher Quality factor shown in Red provides a very narrow bandwidth with a higher gain. So, the filter provides efficient filtering performance for the narrower frequency of interest and all other signal frequencies get attenuated. The inductor with a low-Quality factor shown in green provides lesser voltage gain with increased bandwidth. So, the designer can choose the optimum Q factor values based on the design and efficiency requirements.