Relays are basically switches which are primarily used for the protection of equipment. It generally uses two circuits – A control circuit and a power circuit. The control circuit regulates the flow of power and performs the basic switching operation using a small amount of current which can in turn be used to control a circuit with a high amount of current. In small scale applications, fuses and similar devices are used for protection purposes. In large scale industries, where high reliability is required, relays are preferred.

Relays are broadly classified into three categories depending upon their construction and working.

They can also be classified as:

We will discuss all of them in detail below. 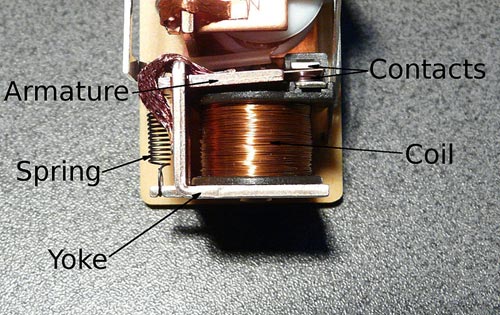 Electromagnet – This is a temporary magnet that becomes a magnet only when an electric current is passed through it. An electromagnet is formed by wounding a wire around a soft iron core. Whenever electric current is passed through the wire, a magnetic flux is induced in the iron core which makes it act like a magnet and produce a magnetic field around it.

Movable Armature – This is commonly known as a plunger or a solenoid. It is the movement of this part that opens or closes the mechanical contacts as it is attracted by the magnetic field generated by the coil.

Contacts (NO and NC) – There is one stationary contact and one movable contact. The movable contact moves in response to the magnetic field generated by the electromagnet, thereby making the contact Normally Close (NC). The contact breaks open in case there is any fault detected in the system.

The figures illustrate the working of an electromechanical relay. The relay is energised by the magnetic field generated due to the electromagnet and thereby changes its contact from Normally Open to Normally close. Only when the relay contacts are Normally close, the power circuit is completed and the load (bulb in this case) gets the power. In case of any fault, the contact changes to Normally Open, thereby causing an interruption in the flow of current and ensuring the safety of the equipment.

Electromagnetic relays can be further classified as-

Static relays are those relays which do not contain any moving parts. They are contrasted with electromechanical relay, which has moving parts for switching. Static relays incorporate static components such as solid state devices, magnetic or electric circuits etc. to obtain output instead of mechanical contacts. Static relays utilize high reliability operational amplifiers (Op-Amp) for the realisation of its basic components. 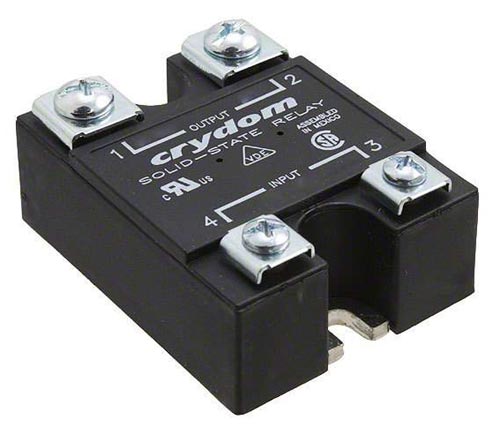 The basic circuits employed in Static relays are –

Due to the absence of moving parts, static relays offer many advantages over the conventional electromagnetic relays. Some of them are –

These relays are usually microprocessor based and are programmable according to the needs of the user. They are more user friendly and offer multi-functional protection schemes. Unlike electromagnetic relays, these do not contain any moving parts and thereby serving all the benefits of static relays as well. Due to these factors, numerical relays are referred to as present generation relays. One of the major advantages of numerical relays is that it can store pre-fault as well as post-fault data so that it can be used further. 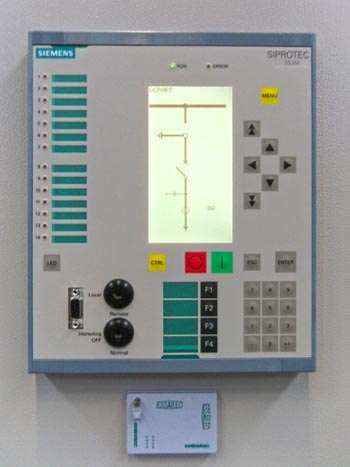 Time delay is type of electromechanical relay which are used to provide a delay in the start-up, shut-down or controlling processes. These relays induce a time delay in making its contact Normally close after the coil has been energized. This is done in order to meet the desired requirements. These are broadly classified into two types, namely – ON delay time relays and OFF delay time relays. 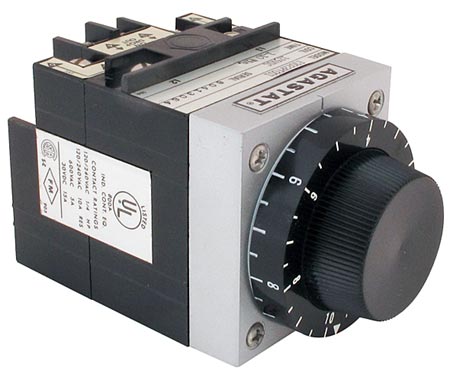 In this type of relays, the timer starts during start-up i.e. when the voltage is applied and the coil is energised. Once the timer reaches the set timing, it stops and the contact closes thereby completing the circuit and turning on the equipment. The ON delay time relays involve two types of contacts –

In these types of relays, a delay is introduced during shut down of the equipment. The off delay timer starts only when the power is removed from the circuit i.e. no power is being given to the circuit anymore and the coil is de-energised. The two types of contacts involved in OFF delay time relays are –

The supply to the system continues and as soon as the fault is cleared, the system works in its normal state again. The relay should be able to differentiate between transients and faults so that it trips the circuit breaker during faults only and not during transients.

Solid state relay may fall under Static Relays. It is a electronic switching device built to overcome the disadvantages of traditional relays such as slow switching action, reliability etc. Solid State relays make use of optical and electrical properties of semi-conductors and does not employ any moving parts.  An opto-electronic isolator or opto-coupler is present between input and output circuits. 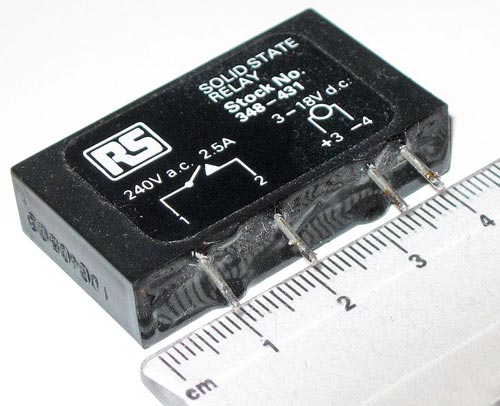 Working of a Solid State Relay

The Solid State Relay consists of an LED, a light sensor and a transistor apart from the input and output circuits. Whenever a control input is given, i.e. power is applied to the input circuit, the LED glows thereby emitting light. The light sensor then detects the glow and closes the connected transistor. After the transistor is closed, current flows through the load circuit. As long as the transistor remains open, there is no flow of current through the load circuit.

As there are no moving parts, the switching action is fast and reliable and less amount of wear and tear is caused to the equipment. It also eliminates sparking, corrosion and vibration issues.

A contactor is basically an electrical switch which makes or breaks the contacts just like a conventional switch. It differs from the conventional switch due to an electromagnet which it incorporates in order to hold the contacts. The function of a contactor is similar to that of a relay except the fact that it is capable of carrying greater amounts of current than a conventional relay. Also, unlike relay contactors cannot provide protection. They are only used in making or breaking the contacts. Contactors find their application in high current circuits, usually those with a rating higher than 20 Amperes. 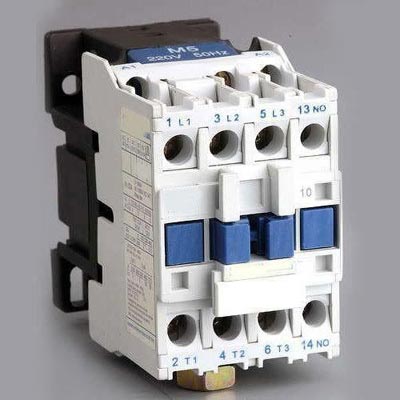 A contactor consists of the following components –

Operation and Working of Contactors

Contactors are generally used for high currents. Whenever the electromagnetic coil present in the contactor is energized, it produces an electromagnetic field. The armature which is a metallic rod is then attracted by the produced electromagnetic field. If the electromagnet is split, then the movable part is attracted towards the fixed part. And hence the contacts are closed are remain in the same position as long as the electromagnet is excited.  Now when the de-energization of the coil occurs, the moving contact moves back to its initial position through the spring. This contact making and breaking action occur very rapidly. Contactors consume a very small amount of power during its operation which can be further reduced by using economizer circuits. 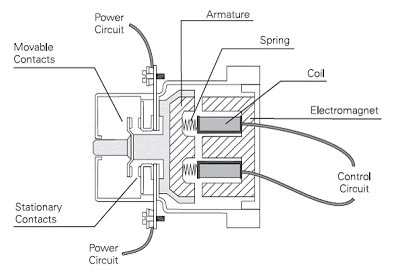 Relays and contactors both perform the switching operation. Both of them can be differentiated on the following bases: