The basic building blocks of the battery involve an anode, cathode, and an electrolyte. Another important part of a battery that we take for granted is the battery separator. These separators play an important role in deciding the functionality of the battery, for examples the self-discharge rate and chemical stability of the battery are highly dependent on the type of separator used in the battery. In this article, we will learn more about battery separators, its types and their functional importance in the performance of a battery. If you are completely new to batteries then you can read this battery basics article to understand the different types of batteries and their significance.

What is a Battery Separator?

A battery separator is a polymeric membrane placed between the positively charged anode and negatively charged cathode to prevent an electrical short circuit. The separator is a microporous layer that is moistened by the electrolyte that acts as a catalyst to increases the movement of ions from one electrode to the other electrode. When the battery is charging the ions moves from cathode to anode and when the battery gets discharged the ions will move in the reverse direction. The separator controls the number of ions moving between the positive and negative terminal and hence it is responsible for the leakage of ions (self-discharge) when the battery is ideal. Although the ions pass through the separator freely it will not have any electrical conductivity and it always acts as an isolator. 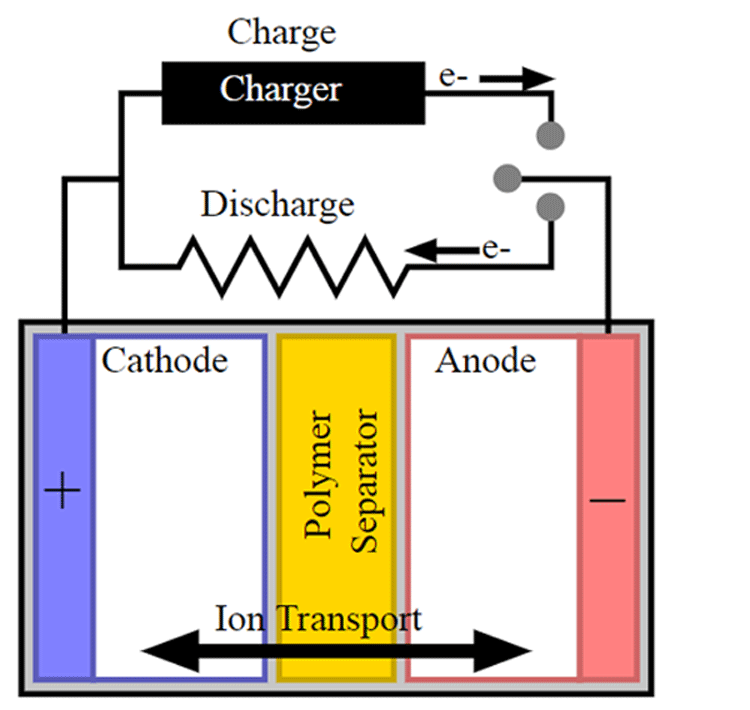 During the early days, all the batteries like lead-acid and nickel-cadmium batteries were made as flooded type/Wet cell batteries where the liquid electrolyte solutions (battery acids) were used.  The flooded type batteries will develop gas when overcharged so a vent was needed to push out this gas. Later, in the year 1947, the sealed nickel-cadmium was developed and in the 1970s the maintenance-free lead-acid batteries were introduced. In these designs, the electrolytes will be absorbed into the porous separator that is compressed against the electrodes so that they can achieve the required chemical reaction. 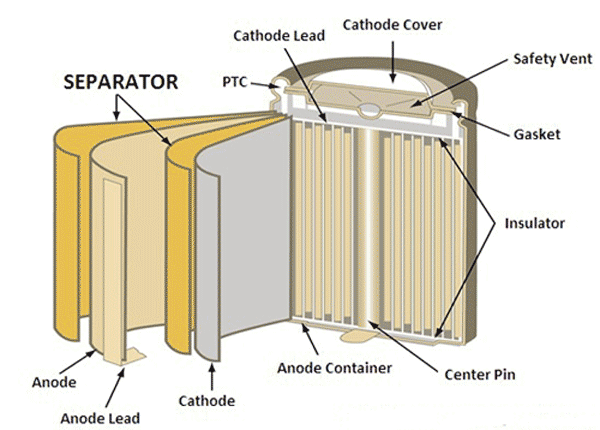 At first, the separators were designed with wood, but they got deteriorated in the electrolyte. Later they were made up of rubber, glass fiber mat, cellulose, and polyethylene plastic. The nickel-based batteries are built with porous polyolefin films, nylon or cellophane separators, whereas the sealed lead acid battery separator uses a separator called AGM Separator (Absorbed Glass Mat) which is a glass fiber mat soaked in sulfuric acid as a separator. The earlier gelled lead-acid batteries developed in the 70s converts the liquid electrolytes into a semi-solid paste. Gel and AGM batteries only have a slight variation in the performance, the Gel batteries were used in the UPS and the AGM batteries were used in starter and deep cycle applications.

The lithium-ion battery separator cells are made from polyolefin as they have a good mechanical property, chemically stable and available at low cost. The polyolefin is created from polyethylene, polypropylene or by laminating them both. The polyolefin separator material used in lithium battery is shown below.

In conditions like rising in temperature, the pores of the separator get closed by the melting process and the battery shuts down. For example, the polyethylene separator (PE) shutdowns the battery when the core temperature reaches 130°C, this process will stop the transporting of ions between the electrodes. If the battery does not shut down at the rising temperature, heat in the failing cell could rise and lead to thermal runaway causing the battery heat and even catch fire.

Separator as internal fuse helps the Lithium-ion batteries to pass through the UN/DOT transportation testing, given by the UN (United Nations) for transportation of dangerous goods worldwide with the United States Department of Transportation (DOT). The Li-ion batteries fall under the dangerous goods category and it can cause safety risks if it is not tested and packed properly. The testing process includes altitude simulation, along with thermal, vibration, shock, external short circuit, impact, overcharge and forced discharge tests.

Most of the batteries that were used in mobile phones and tablets were using a single polyethylene layer as a separator. From the 2000s the large-sized industrial batteries started using triple-layered separators that increase the reliability of separator by using Polypropylene Separator material and improve the thermal shutdown when there is a temperature rise in multi-cell configurations. For example, consider a three-layered separator with a PE battery separator material sandwiched between two layers of Polypropylene - PP Separator.  The PE layer will melt at a temperature of 130°C and close the pores in the separator to stop the current flow; the PP layer will remain solid as its melting temperature is 155°C.

Later in the year 2008, the separators were improved by adding a layer of a ceramic-coated separator. The coating withstands ultimately high temperature without melting down, hence it ensures a further safety level. The ceramic coating works well along with the PE and PP layers and placed near the positive side. The latest trend in battery separator involves the usage of ethyl-cellulose modified PE membrane sandwiched between the two layers of SiO2 nanoparticles doped Polyimide membranes. This new tri-layered membrane is used in high-performance Li-ion batteries that need both thermal shutdown function at low temperature and thermal runaway function at high temperature.

The SiO2 nanoparticles doped polyimide is used to impart the separator with high thermal stability and high-temperature runaway function whereas the single layer of ethylcellulose modified polyethylene membrane provides high mechanical property along with the low-temperature shutdown function.

Properties of a Good Battery Separator

The good battery separator should possess the following property 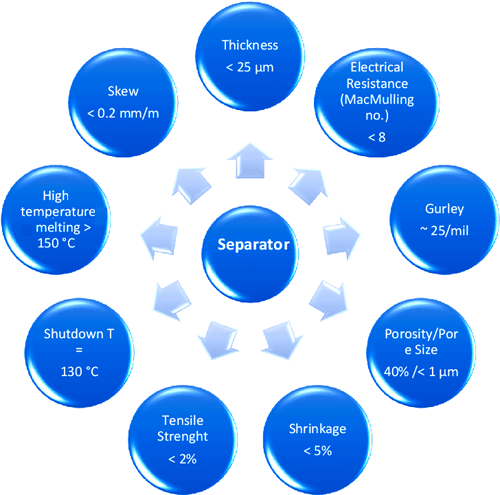 Chemical Stability: The separator’s material should not have any reaction with the electrode or the electrolyte, they should be chemically stable and should not get degraded.

Thickness & Strength: The battery separator should be thin enough to facilitate the battery’s energy and power density and they should also have sufficient tensile strength to prevent stretching during the winding process. The standard thickness of a separator is fixed at 25.4μm, but as the technology developed the thickness of the separators got reduced down to 20μm, 16μm and even 12μm without compromising the cell properties.

Porosity & Pore Size: The separator should have a pore density that can hold the electrolyte and also allows the ion to move between the electrodes. If the porosity is larger it’ll be hard to close the pores when a battery shutdown is to be made. The typical porosity of the Li-ion battery separator is 40%.  The size of the pores should be smaller than the particle size of the electrode components and the pores should be uniformly distributed in a tortuous structure.

Thermal stability and shutdown: The separator should be stable for a wide range of temperatures without curling or puckering and it should be able to shut down at a temperature slightly lower than the temperature where thermal runaway occurs.